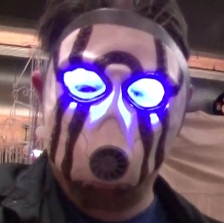 In this week’s vlog I talked with Ryan Consell about what it’s like to not be a real fan. I’m not really committed to any one or even several fandoms, I just sodrt of drift around thinking things are okay. It makes it hard to feel like I’m part of a community sometimes, and other times, when people notice my interest and take it for “real” fandom, I feel like I’m

inadequate somehow. Like I should have done more. Which is total BS.

Weirdly, I thought about this on the bus this morning. The people sitting next to me were discussing comics, of which I have read a considerable amount, and I could feel that nerd urge to correct them about factual errors and educate them in a manner that would make their views more nuanced. Superheroes aren’t simple, they have to be taken in context with the person who writes them. They don’t have a strict continuity of theme or personality usually. I bit my tongue and kept reading, determined not to be a pedantic jerk. I don’t really feel proud of the tongue biting so much as ashamed that I had that feeling at all. They liked the same stuff I like, though apparently not in the same way, and there was an inkling in me that told me that was badwrongfun. Some people’s fandoms are less nuanced than others. Deal with it.