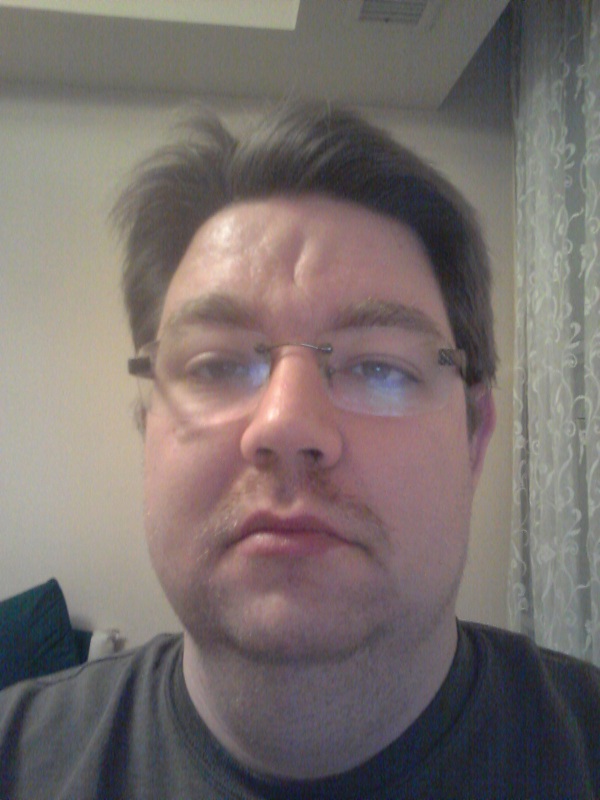 Finished my first week of the new job, and it’s pretty amazing. I’m learning new things, helping plan events and strategies, and generally learning my way around to-level academia from a service perspective. The whole week hasn’t been sunshine and roses, but most of it has. I played at the Maxwell’s movember show on Friday night, and yesterday performed at the Kitchener Farmer’s Market for Movember for kids, so it’s been a good week for events. That’s my week in a nutshell. New job, events, things. I also have another picture of myself with a terrible moustache. And a story. Go past the jump to learn about why Movember is important.

Sometimes I get upset with it. I really don’t like the moustache, and a lot of it seems like beer and fun about a serious thing. When I think about men’s health, I don’t think about beer and parties. Really, I just think about three people. I want to share them with you, because they were wonderful, and because it explains why I do it.

Arvi was my uncle, my mother’s brother, and he taught me what it meant to be a father. When I grew up, it was just my mum and I, and I think everyone who does that wonders what it’s like to have a dad. Single parent families were still uncommon when I was a kid, so all my friends had dads. I’d hear stories on the playground about what they did together, and about whose dad could beat up whose. Kids would boast about their achievements, and talk about how they went fishing or played catch. It’s not that unusual or depressing. I also wondered about what it would be like to have siblings, or a car. It was just a different life.

When we went to visit Arvi, it was like a different world. He and my aunt had a bunch of kids, and there were always a million things going on. They fought like anybody else, but most days were good. Arvi would crack jokes and man the barbeque, no matter how cold it was. I stayed with them for a whole month when I was in the fifth grade, and it still sticks with me. Spending time with my cousins, untangling slinkies at school, and swimming and fishing a lot. But also, Arvi. He was always around, and had this sort of quiet intensity. You could always tell when he was joking and when he was serious by the way his posture would shift, and if he was serious, you listened.

He introduced me to computers. I spent a lot of time playing games and writing assignments on them that month, and was totally fascinated with them. Something which hasn’t gone away, as you can see. We wouldn’t have one at home for a few years yet. Whether he was being firm or messing around, there was never any doubt that he loved us, and that he’d do just about anything for us. We sort of lost touch after that, for a long while. Our families met at events, but that was about it.

Arvi died when I was eighteen or nineteen. We drove to the funeral and then straight back again, because I had to work a shift at 4:30 in the morning. It was the first time I’d been at a funeral for a family member I was really close to, and I remember wishing I could cry but not being able to muster any tears, standing awkwardly in this line while people who knew Arvi shook my hand and offered their condolences. Some of them thought I was his son, and I didn’t correct them. I’d be proud to be, and I know his sons and daughters are.

I never got to know him as an adult, but I would have liked to, even if it was just to thank him for the things I learned. He was my uncle Arvi, and he’d want me to help out any way I can. So I grow a stupid looking moustache. speaking of that, stupid moustache picture time.

That’s all for this week. Next week I’ll have a different story. What’s your story?