Show Us Your Cool Batman Stuff

Nerd Fest was last night, which was basically rad. Charlotte and her team crowded a hall full of people to eat cheese, hear talks, play videogames, play with balloons, board game, and have fun. To be nerdy.

One of the Nerd Nite principles is that everyone’s nerdy about something. That is to say, they’re passionate about it in a way that can be hard for other people to understand. But another way to parse that is that they care about something that other people will think is stupid. Maybe it’s D&D, or beer, or just your 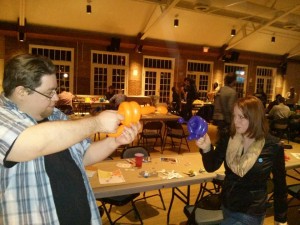 cool Batman stuff. We spend time and money on these things in ways that other people don’t get. Maybe it’s travelling around the world to sites where movies were filmed, or just spending hours wandering the city in search of new Ingress Portals. It’s not quite work and not quite play, but something that threads back and forth between.

It can be scary to talk about. Maybe people won’t understand. Maybe they’ll laugh. It hits that grade school fear that the rest of the class is laughing behind your back. And Nerd Nite takes that away.

No one is laughed at at Nerd Nite. “Come in,” they say, “Show us your cool Batman stuff.” Speakers are invited to share a thing they care about, to show all those things they keep hidden to of an audience that understands. It’s a safe, inclusive space to talk about the things that make you nerdy.

Show us your cool Batman stuff.

For more info on Nerd Nite KW, visit kw.nerdnite.com. They are a great crew of rad people, who put on a show every month.